Manny Pacquiao vs Shane Mosley – Tale of the Tape 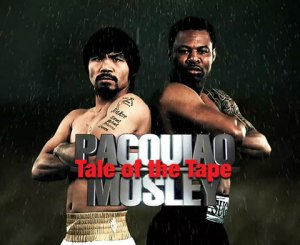 I am not much of a boxing fan but I’ve been watching Manny Pacquiao fights and it is really amazing that he make ways to win his fight. He is the reigning “number one” pound-for-pound boxer and eight-division world champion. He is the Filipino Pride and incumbent congressman of Saranggani Province in the Philippines (every Filipino knows that, lol) this coming  Sunday, 7th of May 2011 (May 8, 2011 here in the Philippines) we expect zero crimes again, ghost town like in some areas and the whole world will cheer for the “Pambansang Kamao” (National Fists for Filipinos) as we all witness his bout against the former WBA Welterweight Super Champion Sugar Shane Mosley. Place your bets, set up your television, buy tickets in cinemas, subscribe to pay-per-view, find online streaming links on the net and let’s get ready to cheer and shout for this rundown. See the tale of the tape below:

For now, watch the four-part documentary series presented by Fight Camp 360°: Pacquiao vs Mosley to know their preparation and life at the training camp and to hack into their boxing lives that features Pacman and Sugar. This open access to the fighters preparations, trainings and everything leading to the clash of the year is produce by Showtime Sports and it will air on both CBS and Showtime.

I am Paolo Mercado for 20 years I've been riding a bike, walking a lot and running a lot. I am Kalongkong Hiker, a trail runner, mountaineer and a biker that can also write a blog of my travels, adventures and places that I visited through walking, running and biking. I write to encourage others to stay healthy and fit. #KeepOnRunning #ShareTheRoad #KalongkongHiker
View all posts by Kalongkong Hiker →
This entry was posted in Running Bloggers, Sports and tagged Bob Arum, Fight Camp, Manny Pacquiao, Pacman, Roach, Shane Mosley, Sugar, Tale-of-the-tape. Bookmark the permalink.