It all started here. I chose 5K then epic battle comes next.

I missed to blog this last year so I am writing about it now. I can’t tell how busy I am last year during the holidays and how I miss to have a write-up about Garfield Runner’s Cup 2011 held at Manila Ocean Park going to Roxas Boulevard. #epicrace #enjoyeditmuch

Kids will love this, I’m sure they do and they did, when I see nothing but all smiles at the end of the race, before there are freebies, photo booth, inflatable slide for kids, etc. 🙂 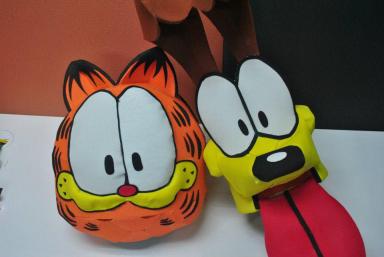 I didn’t really plan to run on this event, I just had the idea to recycle the Garfield head-gear created by my colleague that we used in our last year’s Family Day and Halloween Party in our company in fact it’s not only a Garfield but they also created Odie head-gear too bad I don’t have a running buddy that day. It will be much more cooler if kids saw Garfield and Odie run together, isn’t it? My running friends failed me at this time. 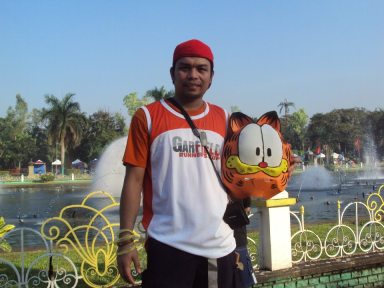 Going home, asking someone to take a picture of you is not bad.

Here’s what happened, I just purchased a new pair of Mizuno running shoes and I need to test and have a feel of it so joining Garfield Run for 5K is my idea so I did. Oh, I forgot to tell the next day by the way is my last leg for Run Trilogy 2011 which is epic because I finished it beyond cut off.

I go to the event not yet registered but I know that they are accepting race day registration so it’s not a problem I get my race bib and a size XXL singlet. It’s not bad it will be a hip hop Garfield running 5K haha.

It's me at the starting line.

There is a pre-running exercise lead by GMA not so popular Kapuso stars and it’s dancing. I joined the crowd dancing with Garfield head-dress on and I was like a celebrity  as parents started to ask me to take a picture with their kids, now I know Mark Beloy’s feelings when he joins cosplays. I embraced being the masked celebrity on that day.

Stretch that legs Garfield, common you can do it! 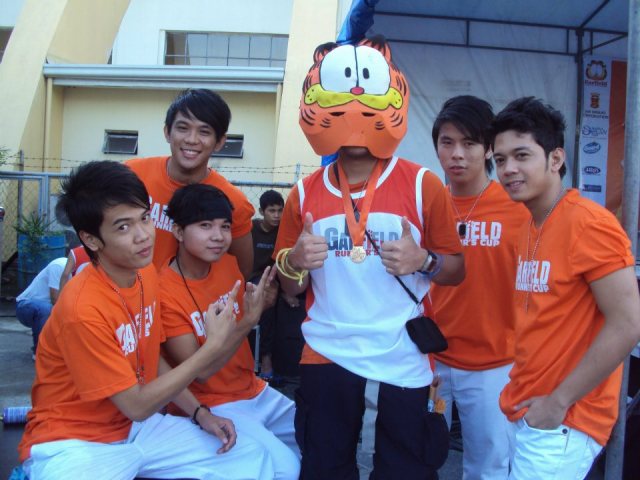 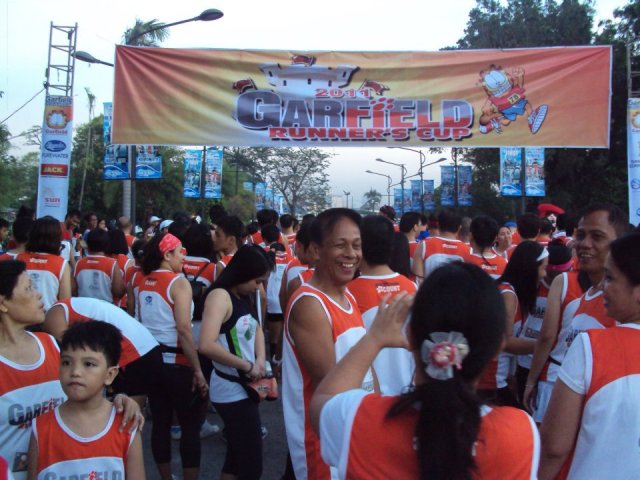 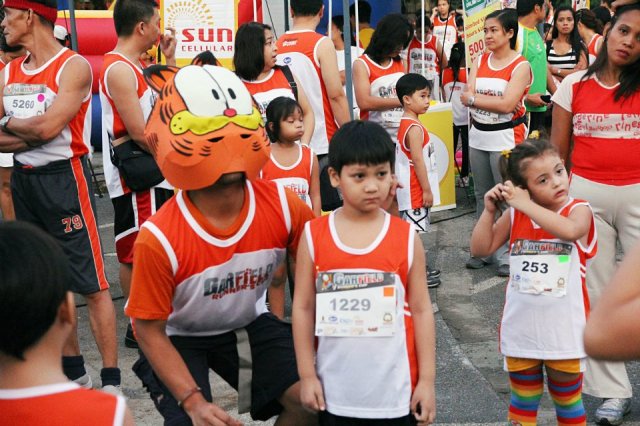 Two minutes countdown until gun start, 5, 4, 3, 2, 1 bang… That’s the cue I had to run now but I still can’t as the kid beside me is crying and wants a picture so I did then hurriedly run to start my 5K run. 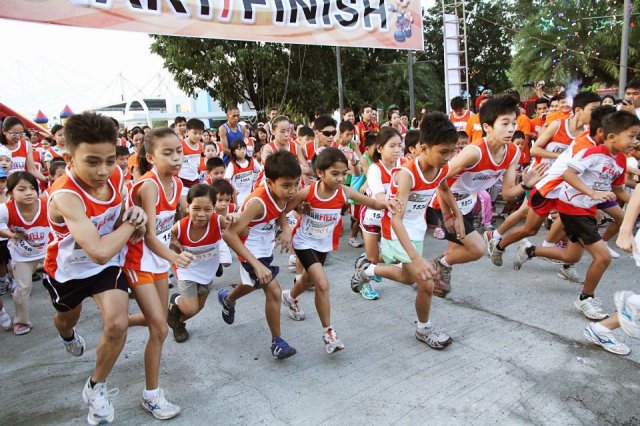 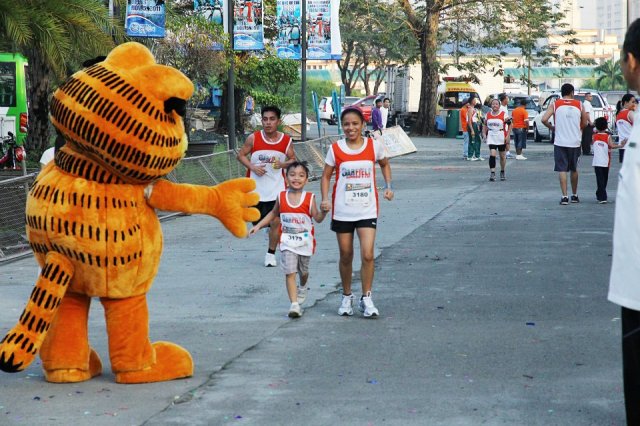 I run with the head-gear on for 2 kilometers then I started to faint I need to get a fresh air so I had to take it off. I completed the 5k run without any accident wearing the head-gear. Thanks God. I want to do it again I said to myself. 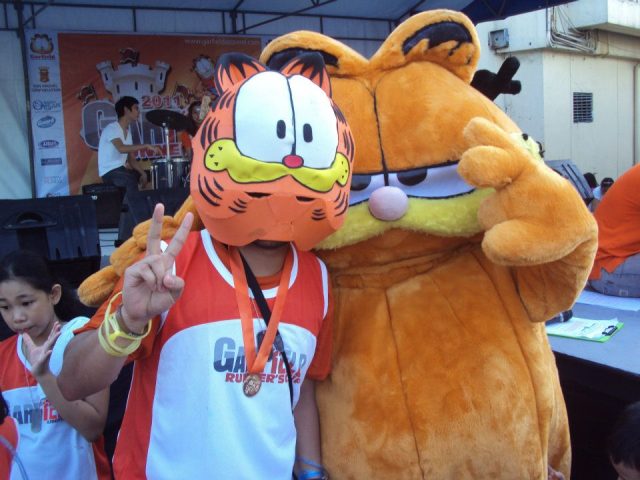 With the real Garfield Mascot

Oh, I forgot to tell, only 100 finishers are the only ones who will get a finishers medal and I must say that I cross the finish line at 88th place with best record of 00:35’04mins knowing that I am wearing a Garfield costume haha. 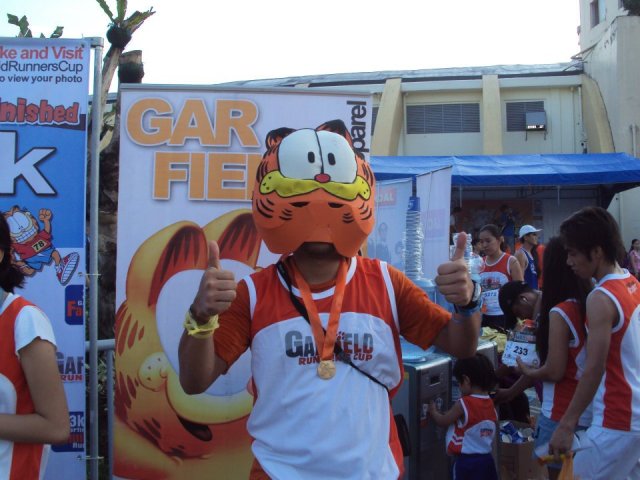 Yey I did it

After finishing the race, I had to wait in line to get my certificate, loot plastic yes it’s a plastic not a bag with of candies and chocolates, medal and dog tag. This is something that I can brag about. This is what I don’t understand though, Garfield is a cat and they are giving us a Garfield dog tags haha shouldn’t it be a cat tag or something. Nevertheless, I like it including the finishers medal it’s not bad for a 5K run. 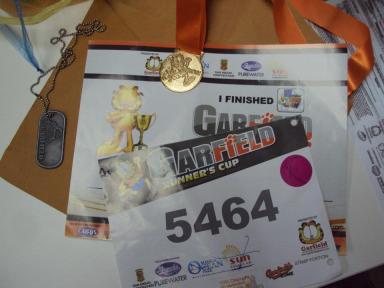 The Garfield goodies, a mosquito repellant sample, candies and other goodies.

Thanks to the organizer of this race. The race itself, water stations are great and race marshals are polite, thanks to you too. 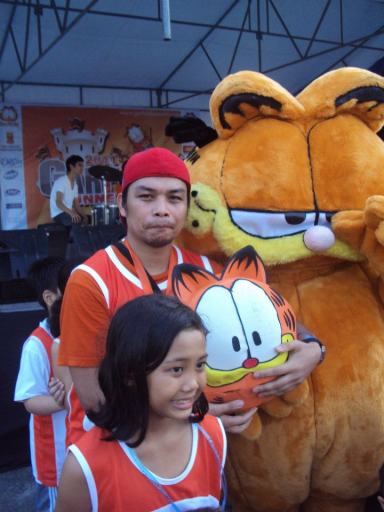 Surprisingly, this run is a lot of fun specially you will see kids, the future runners. Kudos Garfield Run Active Team, the organizer of the event. Please do it again this year. Congratulations to the race winners and finishers!

I am Paolo Mercado for 20 years I've been riding a bike, walking a lot and running a lot. I am Kalongkong Hiker, a trail runner, mountaineer and a biker that can also write a blog of my travels, adventures and places that I visited through walking, running and biking. I write to encourage others to stay healthy and fit. #KeepOnRunning #ShareTheRoad #KalongkongHiker
View all posts by Kalongkong Hiker →
This entry was posted in Events, Family, Running, Sports and tagged Andrew Garfield, Dog tag, Emma Stone, Family Day, Garfield, GMA Network, Halloween, Headgear, Manila Ocean Park, Odie, Presidents, Roxas Boulevard, United States, XXL (magazine). Bookmark the permalink.