Posted on September 2, 2012 by Kalongkong Hiker

Aided by the fair weather, Denolo finished the premier class with a time of 1:15:53, followed by Rene Desuyo in second place with 1:17:58 and Isagani Tacutaco in third with 1:18:03. Denolo is looking to finish his first 42-k track and lead several other qualifiers into the MILO Marathon National Finals on December 9.

22-year old Denolo went through a month long focus training to prepare for the Laguna qualifying leg. “I did not race for three months to condition myself for this leg. However, I am not sure if I can do as much training for the National Finals, as I am competing at this year’s UAAP games. I am hoping to improve my performance and place at the Top 10 nonetheless,” said the Mina, IloIlo native who is currently a varsity member of the University of Santo Tomas athletics team.

Bermundo said she used the racetrack to her advantage when she set the pace for today’s event. “The uphill trail helped me gain distance from the other runners. I was able to prepare for the landscape of the race more than the others, and I am still aiming to develop my shape for the next race,” said the women’s division front-runner. 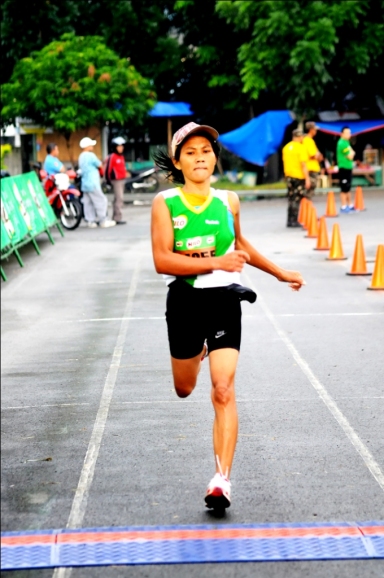 San Pablo City National High School celebrated double victories as they bagged both the “Biggest Delegation” and the “Fastest Delegation” awards with 555 participants and an aggregate time of 27:52.02.

Organizers of the prestigious annual race expressed satisfaction over the turnout of runners in the seven initial qualifying legs and maintained that they are on the right track of the targeted 200,000 race participants this year.

Cash prizes await the winners of the 36th MILO Marathon National Finals as a hefty sum of P300,000 will be given to the champions of the open category and P150,000 to winners of the local category. A P50,000 bonus prize will be awarded to the runner who can break the 2:15:00 invisible barrier, and P20,000 will also be given to a male and female runner who can beat the course records set by Eduardo Buenavista in 2004 and Jho-Ann Banayag in 2008, respectively.

The 36th National MILO Marathon is made possible by Timex, the Bayview Park Hotel Manila, SM Mall of Asia and Reebok, along with partnerships with the Department of Education and the Philippine Olympic Committee. For more information on the race and its advocacy, visit the MILO marathon website or access the MILO Philippines fanpage on Facebook. Follow MILO on Twitter (@MILOPH).

The National MILO Marathon is an annual marathon event open to amateur and professional runners. From its humble beginnings in 1974 as a single marathon race in Metro Manila attended by 747 participants, the National MILO Marathon has grown to be the biggest, longest, grandest national running event in the country attracting more than hundreds of thousands of runners across the country. The race is organized by RunRio, Inc.

I am Paolo Mercado for 20 years I've been riding a bike, walking a lot and running a lot. I am Kalongkong Hiker, a trail runner, mountaineer and a biker that can also write a blog of my travels, adventures and places that I visited through walking, running and biking. I write to encourage others to stay healthy and fit. #KeepOnRunning #ShareTheRoad #KalongkongHiker
View all posts by Kalongkong Hiker →
This entry was posted in Contest, Events, Health, Running and tagged Cagayan de Oro, Eduardo Buenavista, Laguna, MILO Marathon National Finals, Philippine Olympic Committee, Puerto Princesa, san pablo city, san pablo city laguna, San Pablo Laguna, SM Mall of Asia, Sports, tennis, Travel, university of santo tomas. Bookmark the permalink.