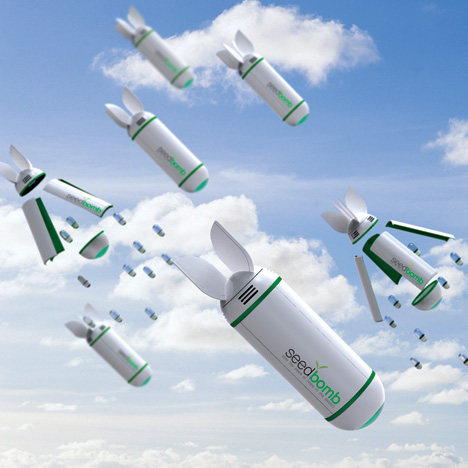 Legend has it that after the World War II got over, American pilot Gale Halvorson airdropped candies in the name of hope, for the Berlin children. War equals devastation, so dropping candies instead of bombs was probably personal retribution. Inspired by this incident, designer Hwang Jin wook and pals have come up with a plan to combat deforestation and desertification of land in a similar fashion. Their mission is called “Seedbomb.”

Mission Seedbomb involves a bomber aircraft and charges full of the Seed Capsules. Essentially the project involves artificial dispersal of seeds over arid areas where natural vegetation has lapsed due to man-made follies like deforestation leading to desertification. Each capsule contains artificial soil and seeds, and are air-dropped over the selected regions.

Housed in biodegradable plastic, the artificial soil provides nourishment and moisture to the seed; till it grows out to be a strong enough plant to sustain itself. As the sapling matures, the plastic capsule melts away, leaving behind a brand new generation.

Sounds like Mission (im)Possible to me, however the logistics of desert environment and the kind of seeds to be dispersed will require a lot research and expertise from the botanists. Because once the capsule melts away and the artificial soil’s nourishment and moisture used up, it’ll take a lot of effort on the plant’s part to survive the harsh environment.

Please read and share to save our mother Earth! Let’s Support Go Green Earth! I hope that the Philippine Government will also do this in our country to fight deforestation. 🙂

I am Paolo Mercado for 20 years I've been riding a bike, walking a lot and running a lot. I am Kalongkong Hiker, a trail runner, mountaineer and a biker that can also write a blog of my travels, adventures and places that I visited through walking, running and biking. I write to encourage others to stay healthy and fit. #KeepOnRunning #ShareTheRoad #KalongkongHiker
View all posts by Kalongkong Hiker →
This entry was posted in Environment, Events, Health, Mountaineering, Outreach and tagged aviation, Berlin, climate, Deforestation, Desertification, Environment, Erosion, nature, science, Seed, Soil, transportation, United States, World War II. Bookmark the permalink.