Michael Jordan’s could have been Greatest Rival in the NBA 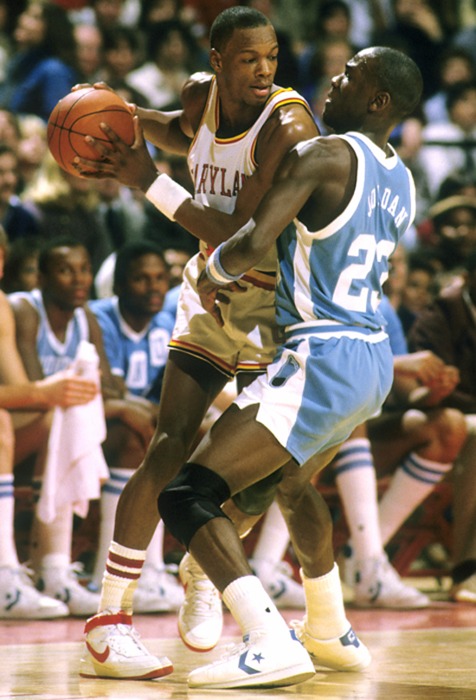 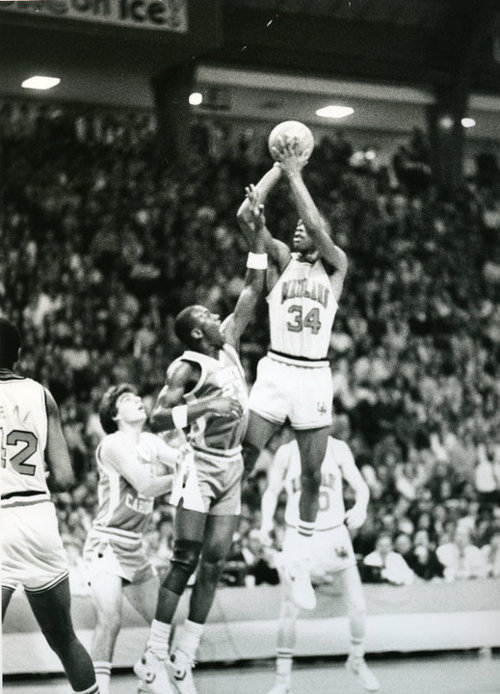 Out of curiosity and being a hard core basketball player of my own rights, I can’t stop watching retro basketball specially with the likes of Larry Bird, Magic Johnson, Michael Jordan and more and today before my birthday comes I just read an article about another great basketball legend that could have been Michael Jordan’s greatest rival of all time and he is no other than Len Bias. I read some articles about him and watch a couple of YouTube clips of him and could have been Boston Celtics Superstar but sadly after draft day he died of drugs. Read more of Len Bias here and watch documentary below:

Jordan scored 21 and he was a monster on the boards with 12 rbds (7 off). He also had 2 blocks and at least 4 steals that I put in the video but could be even more.

He came up with all the big points, rebounds and the steal at the end of the game. And of course, he has his famous dunk at the buzzer. There were also 2-3 questionable calls on Jordan plays which I also included.

The game was over, Michael Jordan and Sam Perkins had seen to that. But Jordan wasn’t quite finished. The ball was loose at center court, then he had it with no one blocking his path to the basket. In about two strides he was past the foul line, his 6-foot-6 body uncoiling, the ball seemingly at his knees as he rose above the rim once again.

North Carolina’s reserves were on their feet in anticipation. “We knew it was coming,” Matt Doherty said.

He was right. Jordan, sailing through the air, the ball cupped in his hand, twisted his body, brought the ball from far behind his head and, wham! slammed it through the hoop as the buzzer sounded.

“I wasn’t really showing off,” he pleaded a few minutes later, a guilty grin written all over his face. “I was just trying to cap off the victory.” But, he admitted, “It was fun.”

Most of the game was not that much fun for the top-ranked Tar Heels. With 14,500 spectators in Cole Field House roaring, with Len Bias and Adrian Branch shooting more like demons than turtles, Carolina had its hands full for 34 minutes.

“Then those two madmen took over,” said Maryland’s Mark Fothergill.

The madmen putting on the show were Jordan and Perkins. One year ago in Cole Field House, the Terrapins humiliated the Tar Heels, 106-94, blowing them out on a night when Perkins and Jordan didn’t look all-state, much less all-America.

Last night, they got even. Perkins did it with 26 points and 12 rebounds, playing with intensity that surprised even his teammates. Jordan, who is intense about a card game in the dorm, was everywhere, with 21 points, 12 rebounds and what will be remembered here as the dunk.

“I think Sam’s heard the people saying stuff like he’s lazy and he’s determined to prove how wrong they are,” Jordan said. “He’s been doing it all year.”

Doherty agreed. “In the second half, Sam hit a layup and got fouled and he started jumping up and down and shaking his fists in the air. I had to stop for a second and say, ‘Is that really Sam Perkins?’ I don’t know if he’s doing that consciously or not, but it sure is working.”

Perkins has been casual about his new-found intensity. “I’m just trying to work as hard as I can,” he said. “Tonight, I thought I did a good job inside, but I want to do more, to dominate in there as much as I can.

“They blew us out in the second half in here last year and we know what a good team they have. We wanted to show them that we’re pretty good, too.”

They did. While Perkins was constantly controlling the inside, Jordan seemed to come up with every loose ball. He had a little trouble controlling the ball on the fast break a couple of times and had to come out in the first half to get a sore knee iced. But when it came down to decision time, Jordan soared.

“I just felt the momentum building inside me as it got to the end,” he said. “I like that time of the game.”

It was 57-56 when Jordan went to the hoop with 6:06 left and was fouled. He made the first free throw, missed the second but grabbed the rebound. He cut to the base line and sank a reverse layup to make it 60-56. Herman Veal missed for Maryland and Jordan came around a screen, spun to his left and hit an 18-footer. It was 62-56 and the Terrapins never caught up.

“They don’t think about taking over at that point,” Doherty said. “They just do.”

“How do you stop Jordan?” Bias asked rhetorically. “I don’t know, how about putting four guys on him?”

Those who argue that two great players can’t make a team No. 1 in the nation obviously haven’t seen enough of North Carolina all-Americas Michael Jordan and Sam Perkins.

The Tar Heels, all-Americas or not, held no big edge until the final minute. The Terrapins, for the most part, played like a team ranked fifth in the country. Sophomore forward Len Bias, with a career-high 24 points, and Adrian Branch, with 19, at times matched the splendor of Perkins and Jordan.

But it was Jordan who scored five straight points to turn a 57-56 lead into a 62-56 margin with five minutes to play. Jordan made the first of two free throws, then hustled incredibly to save his miss on the second shot. After scoring inside for a 60-56 lead, he followed Herman Veal’s miss with a twisting, lean-in jumper for a six-point lead.

After Maryland (10-2, 1-1 in the Atlantic Coast Conference) had pulled to 63-62 on a bank shot by Ben Coleman with 2:03 remaining, Perkins made two free throws for 65-52. Bias missed a jumper, Jordan rebounded and the game, essentially, was over.

Maryland held a 43-40 lead with 14 minutes to play after a jumper by Branch, who took over the game after intermission. The Terrapins had a chance to move ahead by five when Coleman made a steal, but he tried to dribble down court and shoot off the run and missed badly.

Perkins dunked at the other end for 43-42. Another big sequence came with eight minutes left, when Branch forced a shot. He missed, and Perkins came down and scored on a three-point play for a 55-52 lead for the Tar Heels (11-0, 2-0). “I thought I was going to draw a foul, but I shouldn’t have made the move, anyway,” Branch said.

“When we had that (three-point) lead,” Maryland Coach Lefty Driesell said, “we should have slowed it down and worked for a real good shot. But we made a couple of hurry-up moves that cost us.”

Or as freshman guard Keith Gatlin said more succinctly, “We did some silly things at a crucial point in the game.”

Even North Carolina Coach Dean Smith was forced to use a rare superlative. “Perkins and Jordan were great,” Smith said.

It seemed Jordan and Perkins were there for every important basket and rebound. “They did what the great players do,” Driesell said.

Jeff Adkins, who shared time with Veal and Bias trying to guard Jordan, had talked Wednesday afternoon about how Jordan beats teams with second effort more than anything else.

“You know he’s going to the offensive boards,” Adkins said last night. “You can block out if you want, and half the time, he still gets the ball.” Jordan and Perkins each got seven offensive rebounds.

Also determining the outcome was UNC’s defenses — man-to-man in the first half, zones in the second — that kept the Terrapins shooting from outside.

Center Coleman scored only eight points, and made just three of 10 shots. “When he gets eight points and Perkins gets 26, there’s a big void,” Driesell said. “I don’t know what the problem was, but he didn’t have one of his better games.”

Nine of Bias’ 11 baskets came from outside, as did at least half of Branch’s eight field goals. “We’re usually an inside team and this is the first game we’ve played predominantly from the outside,” Branch said. “It was fine for a while, but it hurt eventually. When you get into a jump-shooting pattern with a team that’s going inside, the jump shooters lose nine out of 10 times.”

Both teams played fairly well defensively, especially in the second half when the Tar Heels shot 49 percent and Maryland 46 percent.

Driesell, despite slapping Smith’s hand at the end of the game instead of shaking it, seemed to have calmed considerably 15 minutes after Jordan had thrown down a “rock-the-baby” dunk — one for the ages — to end the contest.

“It was a good, hard-fought game,” Driesell said. “I’m looking forward to playing them again (Feb. 19 in Chapel Hill). If we can get some better play out of a couple of people and make some adjustments, we’ll be right up there. I don’t like losing to North Carolina any time, especially on our home court. But we played the No. 1 team pretty well for 39 minutes.”

Disclaimer: The story, videos and photos are not mine and I am just sharing for basketball addicts and Michael Jordan fans out there. I hope you enjoyed this blog folks!

I am Paolo Mercado for 20 years I've been riding a bike, walking a lot and running a lot. I am Kalongkong Hiker, a trail runner, mountaineer and a biker that can also write a blog of my travels, adventures and places that I visited through walking, running and biking. I write to encourage others to stay healthy and fit. #KeepOnRunning #ShareTheRoad #KalongkongHiker
View all posts by Kalongkong Hiker →
This entry was posted in Basketball, Health, Sports. Bookmark the permalink.