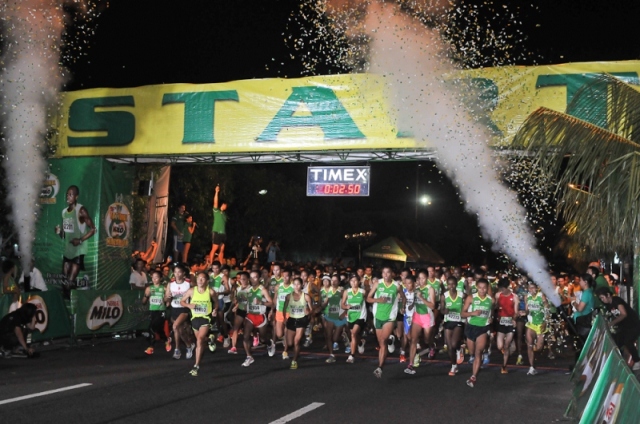 Manila, Philippines, 20 June 2013 – The National MILO Marathon, the most prestigious running event in the country, kicks off another exciting marathon season with the first of 18 leg races set in Puerto Princesa on June 30. Marking its 37th season this year, the sporting event has a rich history that features a continuous expansion of its scope to nationwide races, and a growing attraction among hundreds of thousands of participants from all over the country.

To provide an opportunity for Filipino runners to compete in international races, the 37th National MILO Marathon will be sponsoring this year’s MILO Marathon King and Queen for the 2014 Paris Marathon next April. “This year, we have the honor and privilege of sending our very own elite runners to an esteemed international race event. Through this effort, we hope to inspire more Filipino athletes to push their limits and to embody the resilience, strength and athletic excellence our countrymen are known for,” said Andrew Neri, MILO Sports Executive, Nestle Philippines.

The increased level of competition is expected to drive the number of participants in this year’s marathon, as MILO aims to shatter its current record of 214,448 runners. Last year, MILO Marathon King Eduardo Buenavista and MILO Marathon Queen Mary Grace de los Santos won the men’s local 42-K category and the women’s open 42-K category, respectively. Both runners will be defending their crown against other seasoned contenders in the 37th MILO Marathon National Finals in December.

With the launch of its new 3-in-1 mix MILO R2, which offers sustained energy for working adults, MILO stresses the importance of exercise as part of the work-life balance. In line with this advocacy, MILO will also open a new inter-company running category for workers and employees to encourage the Filipino workforce to be active at work and after work.

MILO is committed to developing the Philippine athletic community and inspiring athletic excellence among Filipino runners especially the youth. “Filipino runners have the potential and the skill to succeed in the international athletic arena. Our international certification makes it possible for them to reach that ultimate goal,” said Neri.

Following its certification from the Association of International Marathons (AIMS) and International Association of Athletics Federations (IAAF), the MILO Marathon complies with global technical standards in all race categories such as distance running course measurement and recognition criteria. The AIMS / IAAF certification puts the National MILO Marathon Manila races, on the world map of marathon destinations.

Having grown into a globally-renowned running event, the National MILO Marathon plays host to a notable number of foreign runners from Kenya, Ethiopia, Germany and other countries from across the globe. To support homegrown talent, while also giving foreign runners a venue to compete in the race, the 37th National MILO Marathon will continue to have Open and Local categories for the 21-K and 42.195-K races in the Manila eliminations leg and the National Finals. To qualify for the National Finals, foreign runners must either provide proof of finish in any AIMS / IAAF accredited races dating back at least one year before race day or finish within the specified qualifying cut-off time during the Manila eliminations race.

“We encourage foreign runners to visit the Philippines and experience a quality race event in our home soil. At the same time, we want to give Filipino runners a platform through which they can raise their performance levels and training standards by exposing them to foreign competition,” added Neri.

Be it for the prize, for the thrill or for the experience, MILO understands that runners have many different reasons for running. Nevertheless, those who will run at the National MILO Marathon will not only run for glory or gold, but they will also run for a noble cause.

Through the National MILO Marathon, runners young and old alike help support MILO’s Help Give Shoes advocacy, which aims to inspire public school children to get into sports and to pursue their dreams. A portion of each runner’s registration fee goes directly to the fund, which MILO then matches to purchase the shoes. Since its conception in 2010, Help Give Shoes has delivered 24,200 pairs of shoes tochildren across the country. This season, MILO aims to reach the 34,200 mark by donating 10,000 more pairs of shoes to 10,000 beneficiaries.

As a response to the call for increased safety during marathon events, Head Race Organizer Rio de la Cruz expressed that Run Rio and MILO are working around the clock to plan and impose a tighter security force in all marathon activities.

“We have employed all the necessary requirements to ensure the safety of our runners and provide them a quality race experience – from hydration and medical assistance to local law enforcement participation, among others,” said de la Cruz. “Before runners answer the starting gun, a full security review will be implemented throughout the race perimeters of every leg race. We have increased the number of police, K9 units, and members of the medical team for each event. A SWAT team will also be on standby in each race venue.”

Complete profiles of all marshals are on-hand for security reference. A comprehensive planning for evacuation schemes is also underway for strict imposition to ensure the safety of National MILO Marathon participants and spectators this season.

To deliver added benefits such as heightened safety measures and the additional deployment of manpower and security personnel, entry fees in provincial and Metro Manila races have been slightly adjusted

MILO has made registration for all running events available through the official MILO website. Interested participants may process their registration form and payment online, and avail of direct-to-home delivery of race kits. Runners may register and purchase their race kits through www.milo.com.ph.

The 37th National MILO Marathon is made possible by Timex, the Bayview Park Hotel Manila, Reebok, SMART and SM Mall of Asia, along with endorsements from the Department of Education, Philippine Sports Commission and the Philippine Olympic Committee. For more information on the race and its advocacy, visit the MILO marathon website or access the MILO Philippines fanpage on Facebook. Follow MILO on Twitter (@MILOPH).

The National MILO Marathon is an annual marathon event open to amateur and professional runners. From its humble beginnings in 1974 as a single marathon race in Metro Manila attended by 747 participants, the National MILO Marathon has grown to be the biggest, longest, grandest national running event in the country attracting more than hundreds of thousands of runners across the country. The race is organized by RunRio, Inc.

I am Paolo Mercado for 20 years I've been riding a bike, walking a lot and running a lot. I am Kalongkong Hiker, a trail runner, mountaineer and a biker that can also write a blog of my travels, adventures and places that I visited through walking, running and biking. I write to encourage others to stay healthy and fit. #KeepOnRunning #ShareTheRoad #KalongkongHiker
View all posts by Kalongkong Hiker →
This entry was posted in Contest, Environment, Events, Health, Outreach, Running, Running Bloggers, Sports, Travel & Leisure and tagged Eduardo Buenavista, elite runners, Filipino, Filipino people, healthy-living, International Association of Athletics Federations, Manila, Milo, paris marathon, Philippine, running, Sports, SWAT, tennis. Bookmark the permalink.