Trivia: Did you know that San Miguel Beermen 2008-2009 Fiesta Cup Champs are composed of 4 Pangasinan Cagers

Now that Petroniverse is no more because of failed campaigns during 4 conferences well not all them as Petron Blaze Booster is the champion of 2010-2011 PBA Governor’s Cup, my favorite team is back to it’s San Miguel Beermen name again the famous white and red jersey where I remember watching really really late at night all San Miguel Beermen games in our neighborhood with the big boys of Kalongkong, Laoac, Pangasinan because we don’t have a TV set at home because we don’t have electricity at that time and we are using candles and torches fueled by kerosene. We usually watch outside the house on a cold night because big boys are drinking ice cold beer or sometimes Ginebra San Miguel at that time so we are not allowed inside but nevertheless me and my brother Robert or we call him on his household name “Obet” are so lucky to watch those games every night even if it is really late at night.

I remember it very well and I was 9 years old at that time when I witness San Miguel Beermen’s championship series back in 1989 that I started to become a die hard fan of this Beer team and really witness the team getting the Grand Slam or 3 peat. At that time my favorite players are Samboy Lim, Ato Agustin and Ramon Fernandez because of their mustaches I think haha, 🙂 Allan Caidic for being the trigger man and making fierce shots at downtown, Yves Dignadice, Art dela Cruz (same name with my uncle Artemio dela Cruz who loves to watch PBA games also, now deceased), for being the role players then the name “Robocop” in the name Alvin Teng and so much more. Argh it is still fresh on my memories.

As time flies and I really became addicted to basketball that I eventually made it to high school basketball varsity team in my senior year I became a die hard fan of San Miguel Beermen especially when a fellow Pangasinan native (Kababayan) Danny Ildefonso from Urdaneta, Pangasinan was drafted and became the cornerstone of the team and named “The Demolition Man”, that every time he makes a successful dunk he would raise his hands saying “Raise the Roof” then he is the 3rd player to grabbed back to back MVP Awards (2000-2001) that put Pangasinan once again in the map of the Philippines aside from being famous with Bangus (Milk fish) and good producer of quality rice for Filipinos.

Now for the trivia part, it was late that I realize that I am more interested in seeking for those athletes from Pangasinan because it makes me more proud of my home province. It started with cycling, then track and field or running and now hoops that I love most. I am a sports minded person so all of these interests me and I do this for fitness reasons.

Did you know that the 2008-2009 PBA Fiesta Cup or known as the 2009 Motolite PBA Fiesta Conference for sponsorship reasons has 4 PBA Players from the Province of Pangasinan that became champions in one season.

Am I kidding? No, I am not, I was also shock a bit and lately realize that it was not a San Miguel Beermen but Pangasinan Beermen Team because of this 4 cagers during this conference. For you to better understand what I am saying I collected video clips uploaded in YouTube just for you eyes only.  Watch it below:

If you are from Pangasinan, who are those players? Can you name the four of them? If you can’t, I will later on, on this blog. Watch the next video clip below for the complete roster of San Miguel’s 2008-2009 PBA Fiesta Conference Champions:

Now that, you were able to watch the clip above it’s time for me to reveal this four players and let me start with of course I already mentioned above let’s start with:

During his PBA Break or holidays Lakay Danny I and his friends are into mountain biking on weekends or so just like me. Oh yeah! Hahaha! Pangasinan MTB Riders unite lol.

Another pride of Pangasinan of neighboring town of Laoac the town of our next featured player no other than from Pozorubbio with the monicker of “Pinoy Sakuragi” or “Kano”: 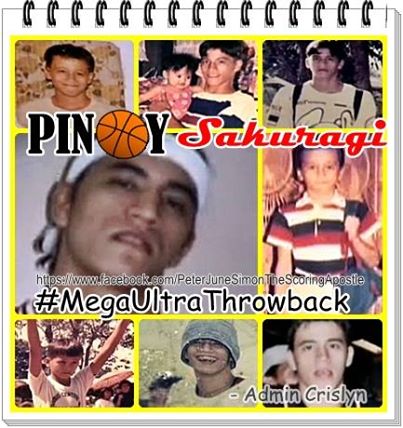 While Marc Pingris is on a vacation somewhere in Pasig City, we spotted him during our on-going basketball league, knowing that it is a very rare chance to take a Kodak moment with him during the half time or so I asked my Kababayan to have a picture with him and I introduced myself that I am from Laoac, Pangasinan town closest to his home town next to Binalonan.

Next Cager, is the pride of Alaminos, home of the Hundred Islands and he’s no other than “The Alaminos Assassin” himself Lordy Tugade: 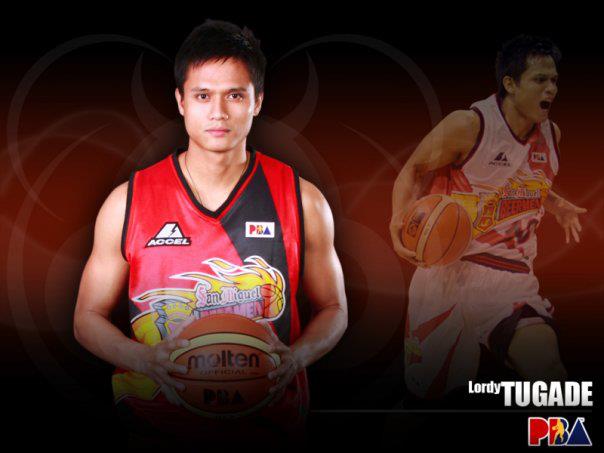 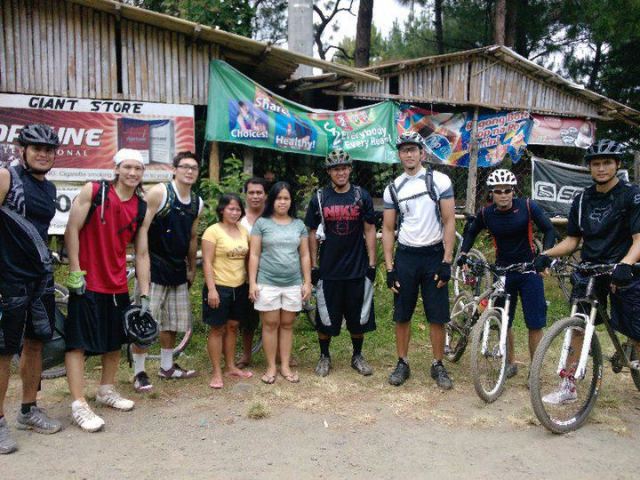 Lordy Tugade, Danny I, Alex Cabagnot and the rest of San Miguel Beermen at Giant Cup somewhere in Timberland

Our last but not the least Pangasinan Cager is Chris Calaguio from Sta. Barbara, Pangasinan 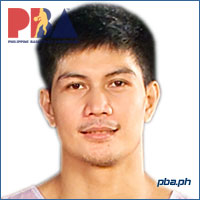 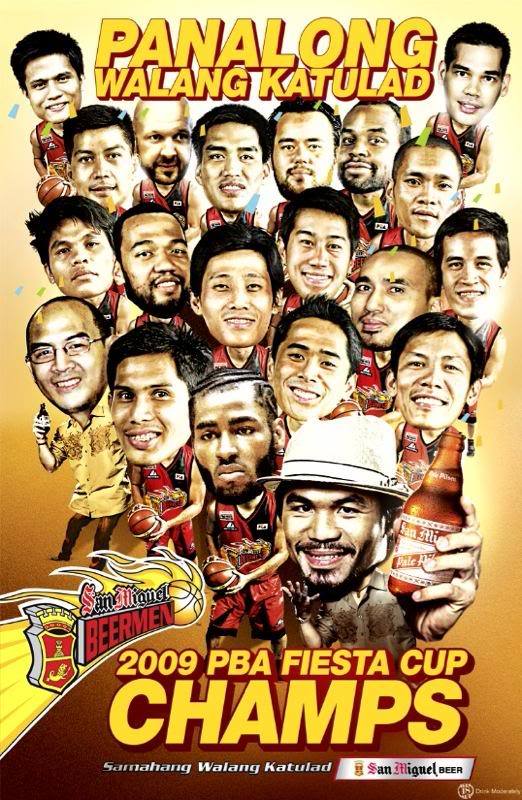 Writing this blog makes me proud to be a Pangasinan Native, the basketball never stops for me as I am now a divided fan because I am now following a Pangasinan players now that Lordy Tugade and Chris Calaguio are no longer playing and that Danny Ildefonso was never signed in by the SMC again but was insured by the Meralco Bolts for the rest of the season and that Marc Pingris is a solid San Mig Coffee Mixers core team. Having said that I am now following San Mig Coffee Mixers and Meralco Bolts (maybe because we held our company basketball game at Meralco Compound) and on rare occasion watch San Miguel Beermen games but not as die hard fan no more maybe I am affected with the way management did to my Kabayans but still I bled beer.

That’s all folks thanks and hope you give comments below.

The Reason why San Miguel Beer is back read some post from PhilDailyInquirer.net said that, San Miguel Beer will make a dramatic comeback in the PBA Commissioner’s Cup to celebrate the 25th anniversary of the franchise’s Grand Slam victory in 1989 and newly-appointed team manager Gee Abanilla said the other day defense will be the focus of the reorganized coaching staff made up of head tactician Biboy Ravanes, consultant Todd Purves and assistants Peter Martin, Boysie Zamar, Riel Banaria and Dayong Mendoza.

San Miguel Corp. is the only remaining original franchise holder since the league opened in 1975 and has been represented by several brands through the years, namely, Royal Tru-Orange, Gold Eagle Beer, Magnolia and since 2010-11, Petron. In the just-concluded Philippine Cup, Petron went to the semifinals and lost to Rain Or Shine in five games of a best-of-seven series. In the previous conference, Petron pushed San Mig Coffee to the limit and bowed to the Mixers in the best-of-seven Governors Cup finals that went the full route. Abanilla was the Petron coach for those two conferences.

To prepare for San Miguel Beer’s return, the team made key personnel changes. Alex Cabagnot was traded to Globalport for Sol Mercado while Rico Maierhofer moved in from Barako for Jason Deutchman and two future second round picks. Former team manager Siot Tanquingcen is now a consultant with Barako. Zamar was recruited from the Barangay Ginebra coaching staff and Banaria, formerly the ABL supervisor of officials, came in on Purves’ recommendation. Additionally, the squad will welcome import Josh Boone, the New Jersey Nets’ first round draft pick in 2006.

I am Paolo Mercado for 20 years I've been riding a bike, walking a lot and running a lot. I am Kalongkong Hiker, a trail runner, mountaineer and a biker that can also write a blog of my travels, adventures and places that I visited through walking, running and biking. I write to encourage others to stay healthy and fit. #KeepOnRunning #ShareTheRoad #KalongkongHiker
View all posts by Kalongkong Hiker →
This entry was posted in Basketball, Events, Running, Sports and tagged Ginebra San Miguel, Pangasinan, pba, San Miguel, San Miguel Beer, San Miguel Beermen. Bookmark the permalink.