(L-R) Jobert Carolino and Mischelle Gilbuena triumph in the 21K race in the 4th leg of the 38th National MILO Marathon in Angeles City, Pampanga.

ANGELES City, Philippines, 19 July 2014 – Jobert Carolino and Mischelle Gilbuena took advantage of the good weather and set a swift pace in the 21K division run at the 38th National MILO Marathon on Sunday in Angeles City, Pampanga. Each received a cash prize of P10,000 and a trophy.

Out of the 10,312 runners who joined this leg, Carolino, Gilbuena and 50 others booked their place for the National Finals on December 7 for a chance to be crowned as the MILO Marathon King and Queen and fly to Japan on an all-expenses paid trip to the 2015 Tokyo Marathon courtesy of MILO.

It was a tight race as Jobert Carolino went head-to-head with Crescenciano Sabal and Sherwin Patron. Carolino was behind former champion Sabal for most of the race. As they neared the finish line, Carolino picked up pace and raced to the end, finishing with a time of 01:15:20, relegating Sabal to second place (01:15:35) and Patron to third (01:22:34)*.

More than 10,000 participants sprint their way in the country’s premiere footrace.

“Sabal was my toughest rival, I was behind him in the last few kilometers. In the last 500 meters, I gave it my all to beat him. He’s a very smart runner,” expressed Carolino, a bronze medalist at the Philippine Olympic Festival. “To be honest, I was not really prepared for this race, I only started training last week when I joined two other races. With my slot in the finals secured, I will focus more on my training, especially enhancing my endurance.”

On the distaff side, Philippine Air Force member Mischelle Gilbuena clinched the win with a time of 01:33:58. The 26-year-old veteran from Cebu, who usually joins the Tarlac leg of the MILO Marathon, struggled throughout the race because of the unfamiliar route. Still, she persevered under pressure and bested challengers Chloe Jane Ong (01:52:00) and Denise Hernandez (01:54:15)*. “I was supposed to join the Tarlac leg last week but I felt that my training was inadequate. I had slight difficulties in running the route,” admitted Gilbuena. “I need to continue my training and work again on my endurance to be in top shape for the National Finals.”

Both Carolino and Gilbuena have been consistently qualifying for the National Finals since 2010 and 2008, respectively.

Local stars also shared the spotlight with the top runners. Celebrity environmentalist and weatherman Kuya Kim Atienza, a passionate triathlete and marathon runner, qualified for the National Finals with a time of 01:52:52. Other celebrities who participated in the race include Isabel Granada, Yayo Aguila, Jaycee Parker, Katya Santos and Maui Taylor.

With the support of the Department of Education and the National MILO Marathon runners, MILO’s Help Gives Shoes advocacy will provide 16,000 underprivileged youth with brand new running shoes and reach the 50,000 mark this year. As MILO celebrates its 50th year, Help Give Shoes aims to make the donation to students in Yolanda-hit cities, particularly Tacloban, Ormoc, and Eastern Samar.

Various folks from Angeles including mothers and kids race their way to the finish line.

The 38th National MILO Marathon is made possible by Timex, the Bayview Park Hotel Manila, ASICS, Lenovo, Manila Bulletin and Gatorade, along with endorsements from the Department of Education, Philippine Sports Commission and the Philippine Olympic Committee. 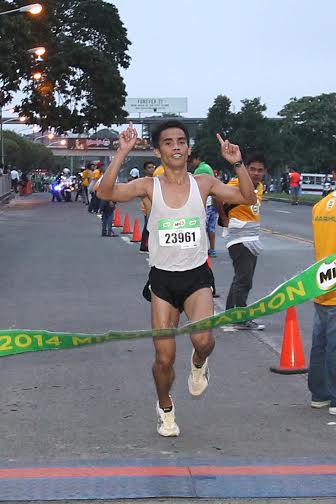 The MILO brand is the world’s leading chocolate malt beverage that can be prepared with hot or cold milk or water. Given its popularity it is a “must have” product for food service operators particularly in Asia, Africa and Oceania.

MILO also promotes participation in sports through its Summer Sports Clinics, MILO-B.E.S.T. Center Training Program, MILO Marathon, and MILO Little Olympics. The leading beverage brand believes that these contribute to the holistic development of Filipino champions in sports and in life. 2014 marks MILO’s 50th year in the country.

The National MILO Marathon is an annual marathon event open to amateur and professional runners. From its humble beginnings in 1974 as a single marathon race in Metro Manila attended by 747 participants, the National MILO Marathon has grown to be the biggest, longest, grandest national running event in the country attracting more than hundreds of thousands of runners across the country.

The National MILO Marathon has grown into a globally renowned running event having been certified by the Association of International Marathons (AIMS) and International Association of Athletics Federations (IAAF), and hosts foreign marathoners from Kenya, Ethiopia, and other countries across the world. The race is organized by RunRio, Inc.

Over a hundred years after it first started operations in the country, Nestle Philippines, Inc. (NPI) today is a robust and stable organization, proud of its role in bringing the best food and beverage throughout the stages of the Filipino consumers’ lives. The Company employs more than 3,200 men and women nationwide, and is now among the country’s Top 10 Corporations.

Driven by its mission to nurture generations of Filipino families, Nestle today produces and markets products under some of the country’s well known brands such as NESCAFE, NIDO, MILO, NESTEA, MAGGI, BEAR BRAND, NESTLE and PURINA, among others. Its product range has expanded to include coffee, milk, beverages, non-dairy creamer, food, infant nutrition, ice cream and chilled dairy, breakfast cereals, confectionery and pet care.

I am Paolo Mercado for 20 years I've been riding a bike, walking a lot and running a lot. I am Kalongkong Hiker, a trail runner, mountaineer and a biker that can also write a blog of my travels, adventures and places that I visited through walking, running and biking. I write to encourage others to stay healthy and fit. #KeepOnRunning #ShareTheRoad #KalongkongHiker
View all posts by Kalongkong Hiker →
Gallery | This entry was posted in Environment, Events, Health, Outreach, Running, Running Bloggers, Sports, Travel & Leisure and tagged Milo. Bookmark the permalink.